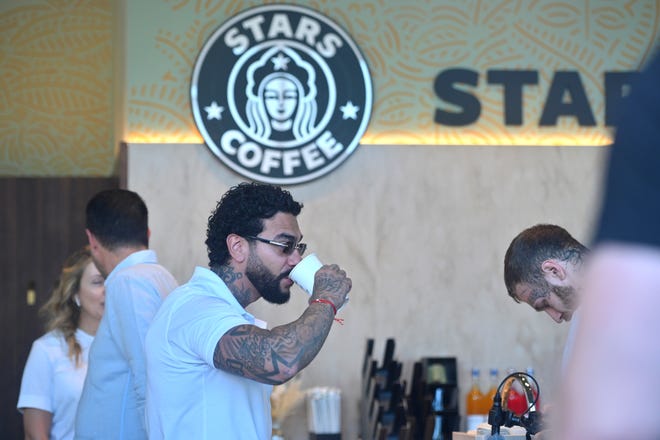 Some hoped their summit in the western Ukrainian city of Lviv would lead to progress on war-related issues, though not major steps that would end the conflict. Even fewer agreements require the consent of Vladimir Putin, who did not participate. Erdogan, who has tried to act as a mediator in the dispute, said he would consult with the Russian president.

The three participants on Thursday discussed expanding prisoner-of-war exchanges and measures to help UN nuclear experts visit and secure Europe’s largest nuclear power plant in Zaporizhia, which is in the midst of fierce fighting that has raised fears of disaster.

“The area needs to be demilitarized, and we must say this: any possible damage to Zaporizhia is suicide,” Guterres said.

Meanwhile, Russian missile strikes that began Wednesday night in and around the northeastern city of Kharkiv continued into Thursday morning, killing at least 17 people and wounding 42 others, Ukrainian authorities said. Zelensky called the attack “disgusting and reprehensible”.

►An ammunition dump has caught fire in the Belgorod region, the latest in a series of incidents on Russian soil near the border with Ukraine, the regional governor said. No casualties were reported.

►Amid the tense international climate caused by the war, Russia has deployed warplanes carrying sophisticated hypersonic missiles to its Kaliningrad region, which is surrounded by two NATO countries, Poland and Lithuania.

►Ukraine’s Prosecutor General’s Office said Mariupol’s education minister and four school principals are suspected of treason. They are accused of collaborating with Russian occupation authorities in Mariupol and “leading a pseudo-organization that organizes educational processes in the city,” the office said.

► Russian and Ukrainian officials acknowledged on Tuesday that an ammunition dump in northern Crimea had exploded, the UK Ministry of Defense said. Russia’s Defense Ministry blamed Tuesday’s explosion on “sabotage.” A senior Ukrainian official told The New York Times on condition of anonymity that an elite unit was responsible. Nine Russian planes were destroyed in the blast, Kyiv said.

However, the plant has been under Russian control since the beginning of the war and it is not certain that the Kremlin will join the tour. A Russian foreign ministry official rejected the idea of ​​a troop withdrawal, saying it would make the factory “unsafe”.

The warring sides accuse each other of risking a nuclear disaster by shelling the vicinity of the plant and plotting to attack the site on Thursday and then blame the other side.

Russian Lt. Gen. Igor Kirillov said his country could shut down the plant’s operations “if the shelling situation in Ukraine continues to develop negatively.”

The facility, the largest of its kind in Europe, generated 20% of Ukraine’s electricity before the war.

The successor to Starbucks in Russia has a similar flavor

McDonald’s Russian successor chose a new look and a name that in no way resembled its predecessor.

In Russia, the coffee franchise that replaced Starbucks took the opposite approach. In fact, except for the acronym – they – it’s hard to tell the difference.

Using the same lettering and a similar logo to one featuring Starbucks’ mermaids, Stars Coffee held a soft opening Thursday in Moscow with a menu that will look familiar to the legions of customers who patronize the Seattle-based chain’s ubiquitous outlets.

Starbucks was the most visible of hundreds of foreign companies that pulled out of Russia or suspended operations in response to the Kremlin’s attack on Ukraine.

McDonald’s, whose arrival in Moscow in 1990 was considered a momentous occasion, was one of them, selling about 850 of its locations to Alexander Gower. The local franchise owner went with the Russian name Vkusno i Tochka, which roughly translates to “delicious — and that’s it.”

The US-based nonprofit Off-The-Grid Mission is providing thousands of deaf or hard-of-hearing Ukrainians living amid the war with survival tools, including solar-powered lights, cellphone chargers and filters for drinking water.

“When a hearing person tells people, ‘Go, go, go,’ deaf people miss this small opportunity to escape,” Angela Maria Nardolillo, founder of Off-The-Grid, told USA Today via email. “Deaf people are the first to be disconnected from important information and the last. get help.”

This is likely what happened on Wednesday night when a Russian missile attack on a residential area of ​​Kharkiv destroyed a dormitory for the deaf among other buildings. Officials said at least 17 people were killed and 42 wounded in the attacks, which continued on Thursday.

The presence of off-the-grid in Ukraine reflects a growing understanding among those responsible for responding to disasters that the unique needs of people with disabilities should be considered in preparedness planning.

According to Agence France-Presse, the 25th cargo ship carrying grain has left Ukraine under a deal brokered by Turkey and Russia to unblock Ukrainian ports. Ukraine’s port authorities said in a statement that the ship I Maria left the port of Chernomorsk with a cargo of 33,000 tons of corn. It is expected to reach Egypt in a few days.

Last month, 600,000 tons of Ukrainian agricultural products were shipped to Istanbul through a corridor agreed by Moscow and Kyiv, according to port authorities. “So far, 25 ships with Ukrainian goods have left the port (Odessa, Pivdeni and Chornomorsk for the Bosphorus Strait),” authorities said.

Russia and Ukraine are two of the world’s largest grain exporters. Russia received assurances that it would not face sanctions under the Food and Fertilizer Agreement, which lifted the blockade and allowed cargo ships to begin sailing from Black Sea ports on August 1.