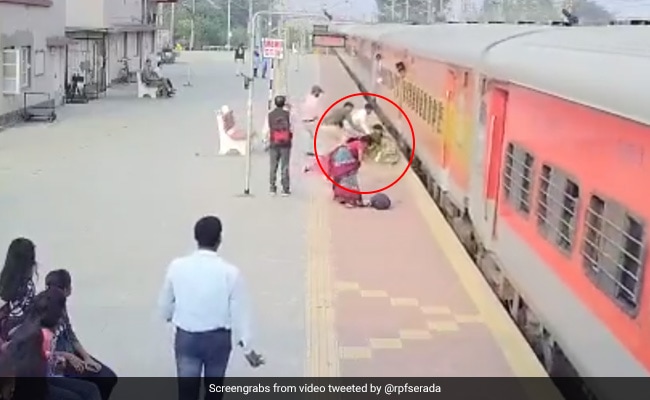 The Railway Protection Force (RPF) officer saved the life of a woman on duty at Purulia station in Bengal who lost her balance while trying to get off a moving express train and almost fell between the train and the platform.

In a CCTV footage tweeted by the Railways, two women were seen jumping off the Santragachhi-Anand Bihar Express just as it was speeding. As one of them descends on the platform, the other loses its balance and dangerously moves closer to the gap between the train and the platform.

On 29.11.21 RPF Post Purulia SI / Bablu Kumar saved the life of a female passenger while trying to de-board between train and platform on running train No. 22857 at Purulia station.@RPF_INDIASanjay_ChanderzscrrpfserADRARAILpic.twitter.com/qC5eHeDu45

RPF sub-inspector Bablu Kumar came running and dragged him to the platform just in time. Several others were seen rushing to the aid of the woman, including a passenger who tried to jump to save her.

Despite repeated warnings and requests from authorities to board and disembark a moving train, passengers continue to risk their lives. CCTV footage shows a passenger leaving the platform and boarding the train.