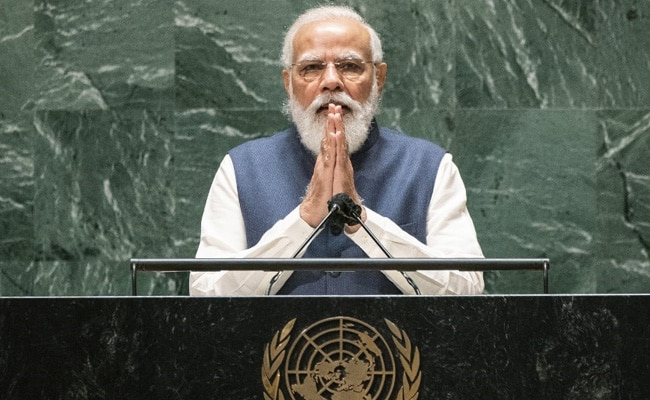 In his address to the UN General Assembly today, Prime Minister Narendra Modi scoffed at Pakistan for “using terrorism as a political tool”. “The danger of protest thinking and extremism is growing in the world,” Modi said at the 3rd session of the UN General Assembly (UNGA) held online last year due to the Kovid-1 pandemic epidemic.

“Those who use terrorism as a political tool must realize that terrorism is an equally big threat to them,” Modi said, a day after India gave a strong response to Pakistani Prime Minister Imran Khan for raising the Kashmir issue at the UNGA.

Pakistan has long been known for harboring terrorist groups like Lashkar-e-Taiba and Jaish-e-Mohammed on its soil, and India has repeatedly raised this issue in the international arena. // The mastermind of the 11 attacks, Osama bin Laden, is seen hiding in Pakistan and the country has several terrorist camps near the Line of Control with India. One of them was hit by an Indian air strike in Balakot in February 2010.

Prime Minister Modi called for a massive global response against terrorism and called on countries to work to keep the world’s expansion lanes free from “expansionism”.

“In Afghanistan, minorities need help. We must fulfill our responsibilities … our seas are our shared resources. We must make sure we use these resources and not abuse them. The seas are also the lifeline of international trade. We must keep them away. The race for expansion and exclusion, ”said Prime Minister Modi.

Earlier, the Pakistani prime minister had raised the Kashmir issue, citing India’s move to turn Jammu and Kashmir into a union territory.

In response, India’s First Secretary Sneha Dubey said, “We hear that Pakistan is a ‘victim of terrorism’. It is the country that sets itself on fire as a firefighter. Pakistan nurtures terrorists in their backyards in the hope that they only harm their neighbors. Have suffered because of their policies.

After attending his first bilateral meeting with US President Joe Biden at the White House and his first private Quartet conference yesterday, Prime Minister Modi arrived at the UN headquarters in New York from Washington DC.

The theme of this year’s general debate at UNGA was “Building Resilience, Sustainable Reconstruction, Responding to the Needs of the Planet, Respecting Human Rights and Reviving the United Nations” in anticipation of the recovery from Kovid-1.