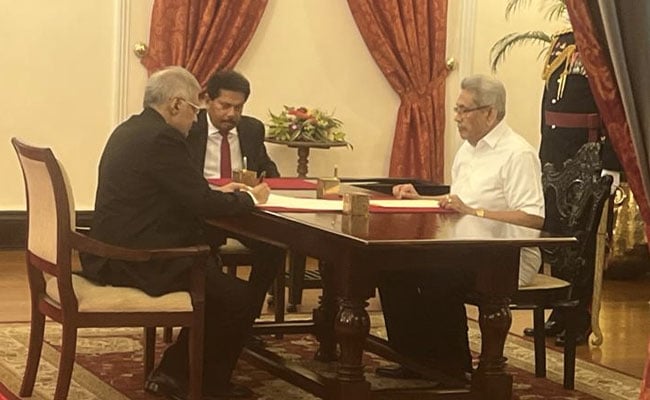 Sri Lanka’s veteran political leader Ranil Wickremesinghe has been appointed the next Prime Minister of the crisis-hit island nation by President Gotabaya Rajapaksa. The 73-year-old was administered the oath of office by the President, who in an address to the nation yesterday, declared that a Prime Minister and his cabinet will be put in place this week.

With the country’s largest opposition party refusing to join a government headed by a member of the Rajapaksa clan, Mr Wickremesinghe — a four-time Prime Minister of the country — appeared the only option.

Already struggling with the most devastating economic crisis since Independence, Sri Lanka was plunged into chaos on Monday as Prime Minister Mahinda Rajapaksa stepped down from his post, nulling the elected government.

Anti-government protesters also want President Rajapaksa to step down and the Lankan parliament is expected to debate a no-confidence motion against the President on May 17, the Speaker’s Office has said.

With widespread shortages of food and fuel, soaring prices of essential commodities and hours-long power cut, there have been massive protests over the government’s handling of the situation.
On Monday, groups of pro and anti-government activists clashed in Colombo, triggering curfew and a state of emergency across the island.

In his address yesterday, President Rajapaksa had said to “control the current situation, and prevent the country from heading towards anarchy”, he would appoint a Prime Minister and cabinet “that can command a majority in Parliament and can gain the confidence of the people of the country”.

Sources indicated that he held talks with Mr Wickremesinghe before and after the address and an agreement was reached.