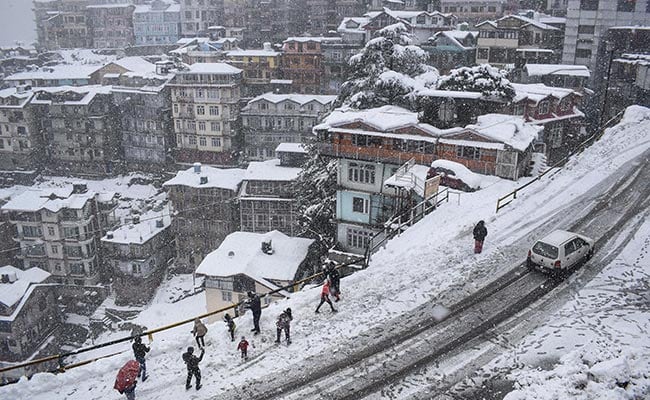 A severe cold wave has led to many scenic views across Himachal Pradesh.

Waking up in the morning and looking out the window, and finding snow blankets everywhere – this is what the residents of Shimla in Himachal Pradesh have been feeling for days. As its snow grip tightened in the winter kingdom, people could see their backyards, houses and streets covered in white sheets on Sunday morning. According to Meteorological Center Shimla, snowfall is expected in different parts of Himachal Pradesh till January 25.

As a result of this severe cold wave, many beautiful scenes have been seen across the state. From the primitive and untouched blankets of snow-covered trees to the beautiful snow-covered railway station, the sights are simply mesmerizing.

BJP leader Manjinder Singh Sirsa shared a video on Twitter of a train moving away from the snow-covered Shimla station. He captioned the post, “You don’t have to plan a trip to Switzerland to experience this. Watch the white washed Shimla railway station as the train slowly moves over the snow-covered tracks. ”

You do not have to plan your trip to Switzerland for this experience
Check out the white washed Shimla railway station as the train slowly moves over the snowy tracks!

HP Traffic, Tourist and Railway Police also shared pictures of Shimla Railway Station. In a photo posted on Twitter, the station is seen covered in white. The caption read, “Shimla is a beautiful snow-covered railway station.”

Prajwal Busta, a lawyer and member of the Himachal Pradesh State Planning Board, shared a video of the snowfall. “I am still awake – from Shimla on Sunday morning,” he wrote.

So far waking up – Sunday morning from Shimla ???? pic.twitter.com/QKFKz4VryT

Visual from this morning. pic.twitter.com/yAI0Qu1Pam

In a subsequent tweet, they shared some pictures of the snow-covered streets where some people and dogs went out to take advantage of the weather. The caption reads, “The city is in the process of clearing snow amid fresh snow.”

In the picture Road covered with snow in Shimla, Himachal Pradesh.

The city is in the process of clearing snow amid fresh snow. pic.twitter.com/oyVsPy8gnO

According to IMD, Shimla is likely to witness snowfall and rainfall till January 25. Moreover, heavy rainfall or snowfall is also forecast in Jammu and Kashmir and Uttarakhand. Earlier, the IMD had said that bad weather was expected in Himachal Pradesh till January 24.