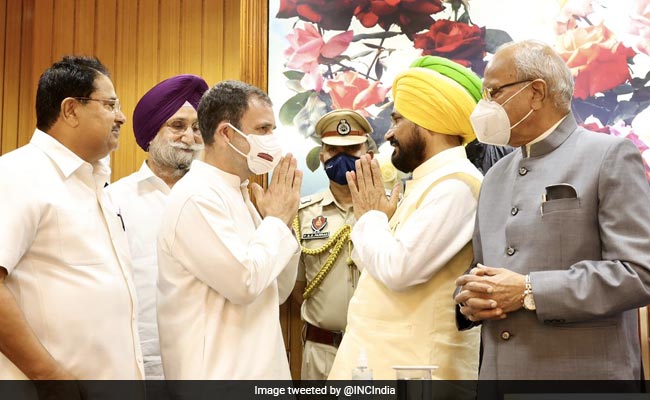 Charanjit Singh Channy was sworn in as the Chief Minister of Punjab earlier this week.

Sources said that Punjab Chief Minister Charanjit Singh Channy has finalized the names for his cabinet, sources said today after talks with Rahul Gandhi. Mr Channy, who took over as chief minister on Monday, has visited Delhi three times since his swearing-in to discuss cabinet reform.

The Chief Minister will meet Governor Banwarilal Purohit this afternoon.

Last week, unrest in Punjab – which lasted for months – came when Amarinder Singh stepped down as chief minister amid clashes with his critic Navjot Singh Sidhu.

After a series of meetings to resolve differences, Mr Channy was chosen the next day as the first Dalit Sikh face in the state to lead Punjab.

In the cabinet reshuffle, Mr Channy could replace a few ministers who are said to be loyal to Amarinder Singh. The cabinet could also see some new faces, the report said.

“I am a common man, sitting here while other parties are talking about the common man. This is the common man government. It will have to make a lot of decisions for Punjab,” Mr Channy, who is close to Navjot Singh Sidhu, announced after taking the oath on Monday. Tune setting.

Rahul Gandhi, who was criticized for seeing a change of leadership in Punjab, was present at the swearing-in ceremony.

Besides Mr. Channy, his two deputies – Sukhjinder Singh Randhawa and Omprakash Soni – were also sworn in. Both have been carefully chosen to tie the maths of the congressional vote.