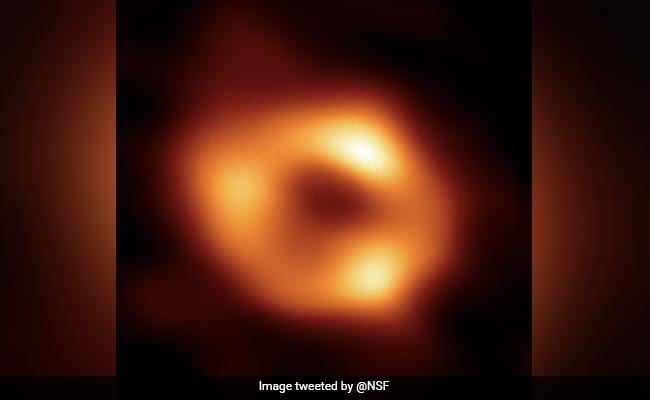 The image of Sagittarius A black hole released by National Science Foundation.

Astronomers on Thursday provided the first look at the dark and dust lurking at the centre of our Milky Way galaxy, unveiling an image of a supermassive black hole that devours any matter wandering within its gargantuan gravitational pull.

The black hole – called Sagittarius A*, or SgrA* – is only the second one ever to be imaged. The feat was accomplished by the same Event Horizon Telescope (EHT) international collaboration that in 2019 unveiled the first-ever photo of a black hole – that one residing at the heart of a different galaxy.

The discovery was announced by National Science Foundation (NSF), an independent agency of the US government.

“Our own black hole! Astronomers have just revealed the 1st image of the supermassive black hole at the center of our Milky Way galaxy using the @ehtelescope – a planet-scale array of radio telescopes that emerged from decades of NSF support,” NSF said on its Twitter handle. The image was released in six simultaneous news conferences in the US and around the globe.

Our own black hole! Astronomers have just revealed the 1st image of the supermassive black hole at the center of our Milky Way galaxy using the @ehtelescope– a planet-scale array of radio telescopes that emerged from decades of NSF support. https://t.co/bC1PZH4yD6#ourblackholepic.twitter.com/pd96CH3V0m

“Congratulations to the @ehtelescope team on capturing the first image of Sagittarius A*, the black hole at the center of our galaxy!” a tweet from NASA said.

Sagittarius A* possesses four million times the mass of our Sun and is located about 26,000 light-years – the distance light travels in a year, 5.9 trillion miles (9.5 trillion km) – from Earth.

The photo shows a doughnut-shaped dark and silent space filled with radio emission. The black hole cannot be seen because even light can’t escape its strong gravitational pull. But the new picture has traced out its shadow by a glowing, fuzzy ring of light and matter that is swirling on the edge before its eventual plunge into oblivion.

The diameter of Sagittarius A* is about 17 times that of the Sun, the astronomers explained.

Black holes are extraordinarily dense objects with gravity so strong that not even light can escape, making viewing them quite challenging. A black hole’s event horizon is the point of no return beyond which anything – stars, planets, gas, dust and all forms of electromagnetic radiation – gets dragged into oblivion.

The Milky Way is a spiral galaxy that contains at least 100 billion stars. Viewed from above or below it resembles a spinning pinwheel, with our sun situated on one of the spiral arms and Sagittarius A* located at the centre.