Sons head coach Monty Williams said the team would move on to Paul’s situation as they entered the league’s Covid-19 protocol with previous players this season.

The All-NBA Guard averaged 15.7 points, 8.7 assists and 4.1 rebounds in 10 playoff games this postseason, taking the Sun to an 8-2 playoff record, knocking out defending NBA champions Los Angeles Lay Corsk in the first round.

The National Basketball Basketball Players’ Association, of which Paul the President, publishes the Covid-19 test results weekly. Of the 144 players tested for the Covid-19 since June 9, the NBPA said Wednesday that “one new player has returned to a confirmed positive test.”

“Anyone who has returned a confirmed positive test or has been identified as having close contact with an infected person has been isolated or segregated as per the rules established by the NBA and Players’ Association in accordance with CDC guidelines,” the NBPA said.

Williams declined to comment if Paul had fully vaccinated against Covid-19 and any player would be considered close contact, but said the team practiced yesterday and had a “good” practice today.

Williams said, “We had a very good practice today, got up, the boys got really good sweat. They’re actually still out on the floor. Nothing has changed for us.” 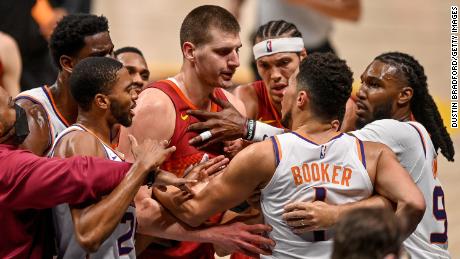 Sons lost to the Denver Nuggets in the Western Conference semifinals on Sunday and the lobby is waiting for a chance to advance to the NBA Finals for the Angels Clippers and the winner of the Utah Jazz Series.

The NBA has not announced the final dates for the Western Conference finals, but Williams is still not thinking about whether he will get Paul for Game 1.

“I won’t go there until I’m there, so I have no reason to be pessimistic at all,” Williams said. “We just have to wait and see what happens.”

The next update about Paul will be provided Saturday, the team said.

Williams added, “My faith will not sink now because we had a few obstacles. We had obstacles throughout the season and we spent a lot. You look forward to these challenges, you embrace them, and you move on.”

Amir Vera of CNN contributed to this report.