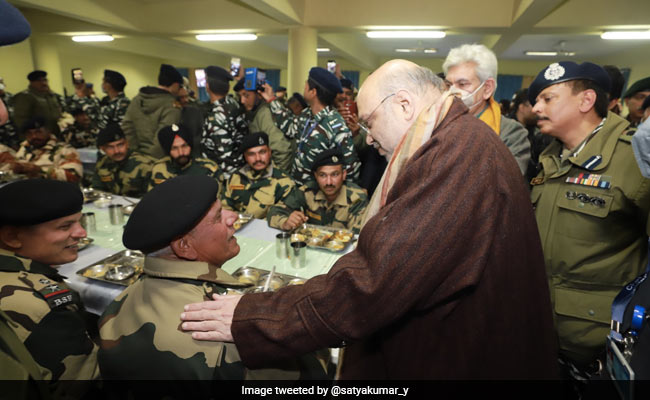 I want to spend a night with you and understand your problem, Amit Shah said

The Modi government has a zero-tolerance policy on terrorism and the situation in Jammu and Kashmir has improved a lot, “we should not be satisfied until complete peace is achieved,” Union Home Minister Amit Shah said on Monday.

Mr Shah, who extended his three-day visit to Jammu and Kashmir, stayed overnight at the CRPF campus in Lethpora, Pulwama, where 40 paramilitary personnel were killed in a suicide car bomb attack by Pakistan-sponsored terrorists in February 2019.

“I want to spend a night with you and understand your problems,” Mr Shah told security personnel on the CRPF campus, adding that this was his “most important” preoccupation during his visit to the Union Territory.

Mr Shah said that while the law and order situation in Jammu and Kashmir had improved a lot, he was hopeful that “in our lifetime we will be able to realize a peaceful Jammu and Kashmir as envisioned by Prime Minister Modi”.

“The Narendra Modi government has a zero-tolerance policy towards terrorism. We cannot tolerate it. It is against humanity. Protecting the people of Kashmir from those involved in this heinous crime against humanity should be our priority,” he said. .

The Home Minister thanked the CRPF and other security forces for ensuring that there was no bloodshed after the repeal of Section 370 in August 2019.

“On the development front, a lot of changes are taking place in infrastructure, industry and education as the Army and the CRPF are making sure that all evil designs are defeated,” Shah said.

He said that when sections 370 and 35A were withdrawn, there were many fears that “there would be a huge backlash”.

“It could have been, maybe there could have been bloodshed, but I’m here today to let you know and to feel free to say that not a single shot was fired because of your caution. It’s a big deal for us.”

“After taking a big decision in the interest of the nation and JK, with the vigilance with which 28,000 jawans and JK police members worked, there was no bloodshed and a new era of development in Kashmir began,” he said.

The impact is visible in the fact that Pulwama, which was known across the country and around the world for its terrorist attacks on the CRPF, will now have a medical college built at a cost of Rs 2,000 crore, he said.

However, he questioned why 30 civilians should also be killed in the terrorist incident.

Mr Shah said the people of J&K had accepted the decision to withdraw Section 370.

“All the forces here have taken proper care of the law and order situation. So, as the home minister of the country, I thank you for the good work,” he said.

Mr Shah said when Modi’s dream of development in JK was successfully fulfilled, there would be peace.

“And I believe we’ll only be able to see it in our lifetime,” he said.

“Jammu and Kashmir stands as an example of truth. If we are able to provide a safe environment and grassroots democracy, anything can be achieved,” the minister said, adding that development in JK was moving at double speed.

Mr Shah said India, which was ranked 11th in 2014, would soon be a major economic power.

“Today we are in the sixth position and I am sure that by 2024 we will reach the third position,” he said.

The Union Minister said it was an honor for him to spend a night with CRPF jawans on the Pulwama campus.

“Being with the Army, the BSF, the CRPF or the SSB who are guarding every last inch of the border is a very important program for me. This is the last program of my JK tour and I can say without a doubt that this is the most important program,” he said.

A suicide bomber from the Pakistan-based Jaish-e-Mohammed (JM) terrorist group attacked a CRPF convoy in Pulwama district on February 14, 2019, killing 40 workers. India then launched an anti-terror air strike against the JM training camp at Balakot on 26 February.

The next day, the Pakistan Air Force took revenge and shot down a MiG-21 in an aerial battle and captured its pilot wing commander Abhinandan Verthaman, who was later released.

The IAF said that during aerial engagement on 27 February, one of their MiG-21 bisones shot down a Pakistani F-16 fighter jet.